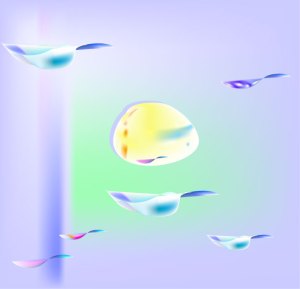 Many people have precognitive dreams. The more we focus on them, the better we can remember and relate the dreams to our waking-life events. Some examples would be too personal to share, but here’s one good plain one.

A few weeks ago I had this dream, where I was watching a beautiful big eagle-like bird flying. Then, it turned towards me and started approaching fairly low. I covered my head with my hands for protection, in case the bird was going to come too close. Well, it actually landed on my head(!), at which point it became a white swan. The swan was trying to get my attention by using its beak to poke at my hands. I didn’t feel attacked or scared, but it was annoying, so I waved my hands for it to go away.

The swan moved onto a floor and was lying on its back. I could see now that it was hurt—it had a red bloody hole in its stomach. I realized that it was trying to get my attention so I could help it. I looked at the hand I used to try to brush it off of my head, and it had some blood on it. I felt bad for the swan, so I called a vet emergency clinic. I also took the swan to an acquaintance, as I didn’t want my dog to attack it while it was recovering. Sometime later, I picked the swan up from her and the swan was doing much better, so a happy ending there…

Now, to the interesting part—what actually happened later that day, after I woke up:

That evening, I went to see “True Grit,” but unexpectedly it was sold out. The only other movie playing around that same time was “Black Swan,” which I HAVEN’T seen previously. In fact, I didn’t even know it was still playing in the movies, as it’s been released quite some time ago. So I went to see “Black Swan” instead, and it was pretty good. The light bulb went off at the very end of the movie, as I recalled my dream. [For those who haven’t seen the movie, I’ll stop here to not spoil the fun.] For those who have, you’ll appreciate the connection between the two stories.