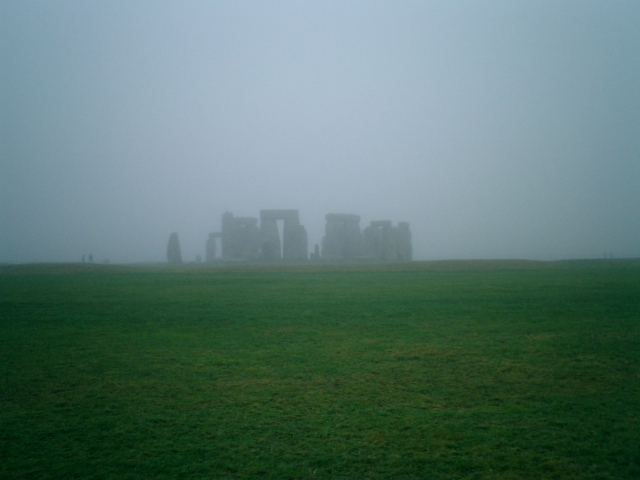 The night before visiting Stonehenge for the first time in my life, I had this dream:

I was crouching by one of the big stones, on the inside of the circle, trying to hold on. I had to hold on tight, as the powerful wind was blowing—not so much the air was moving, but rather the energy was very intense, flowing in circular motion. I saw this man in a long red hooded robe—he was a priest, he was conducting a ceremony—what he was doing was causing the increase in energy.

The stones were polished on one side (facing inside), and their surface was looking silver-ish. I became aware that the stones were used for reflecting and intensifying the energy, as well as trapping and storing it and guiding the energy in a desired way. It was solar energy; I heard the words, “solar power wind.” The reflecting/intensification was necessary because constant/unlimited access to solar power was not available (due to clouds).

I also became aware that the air in the surrounding area (green pastures) was becoming warmer due to accumulation of the energy. Moisture on the ground was evaporating and filling the air with fog. The air was now misty and warm, and I saw people getting undressed (partially) to enjoy this and also to perhaps take part in some ceremony that was coming next which involved bathing. I saw a crescent-shaped above-ground pool filled with water—its walls were made out-of grey/black stones.

The atmosphere was tranquil and celebratory. It was also quiet—I did not hear any talking or music.

The next day, upon arriving at Stonehenge (in January), we enjoyed a very misty day, and I had an opportunity to touch some blue stones at the visitor center—yes, they are indeed warmer in temperature than any surrounding stones. Hmm… I haven’t heard about this factoid before (blue stones being warm to the touch), but that would be a connection with my dream about stones being used for harboring energy.

Note that when I arrived in England that day, I didn’t know for sure we’d be passing by Stonehenge—my trip was planned to go to a different destination; it’s just that the driver wanted to show us Stonehenge, so we made a detour. Also, while at Stonehenge, I saw a sign for Bath—I knew of the city, but not about its exact location or that it was close to Stonehenge. So, to emphasize, I was not researching about Stonehenge, stones, etc. in anticipation of visiting it and did not know about the blue stones retaining warmth.

The reason for writing up the story was the ad for the Upcoming National Geographic special on Atlantis. Made me think of all these circular formations and why they were in fact circular. Perhaps, it had to do with harboring solar energy? Also, the situation in Japan (for which I prayed many times) clearly shows we need to use safer alternative energy sources.